A trip that’s anticipated year-round, this weekend we went beach camping in Westport. It’s an annual tradition for Lindsey and her friends. Our crew totalled 19 people and most of us took Friday off work. It was stellar.

We did beach stuff. Tacos and nachos. Hot dogs, corn, and potatoes on the fire. Banana boats and smores. Bacon and eggs. Whiskey and beer.

Our tents were right on the beach. Guys in Side by Sides pulled our gear from cars to our spot in the sand.

I brought my bike and took off for a quick climb up Branscombe road and some nearby dirt. I played in the surf and caught a few waves on a boogie board.

I generally don’t document my road bike rides. But maybe I should do it a bit more often.

The day after Christmas I rode from home in SF and looped around Paradise drive. I was surprised to see so many cyclists riding the loop clockwise. It seemed to be a better idea to ride it on the ocean side.

Crossing back over the Golden Gate was pretty chaotic with large numbers of holiday visitors. They really should keep the bike lane open all the time. Hundreds of bikes and thousands of people don’t mix well on a sidewalk.

Crossing a nearly empty bridge on my way into Marin.

It was Dani’s idea. We’d bike around the lake the day after a hard backpacking trip in Desolation Wilderness.

We started near home base on the west shore of the lake. I was a little nervous about that as it meant we’d be doing the largest climb just south of Emerald Bay towards the end of the day. It turned out to be not all that hard of a ride.

If you’re going to do it, Columbus Day, or any other mid-week day in the fall, is probably the time to do it. I wouldn’t exactly want to do this ride on a summer weekend when there are far more cars on the road, more boat trailers and more RVs. This Monday, traffic wasn’t much of a problem. I was only buzzed too closely once.

I was surprised and happy to experience the Tahoe bike paths. There was more miles of it than I expected. It would have been easier to stick to the road because the paths are windy, littered with pine cones, bumps and steeper grades, but it was far more pleasant to be on the trail.

For lunch, we braked in South Lake Tahoe. We braked again at Taylor Creek to watch bears eat salmon.

My legs have never been so dirty with road grime as they were after this ride. I should probably clean my bike. 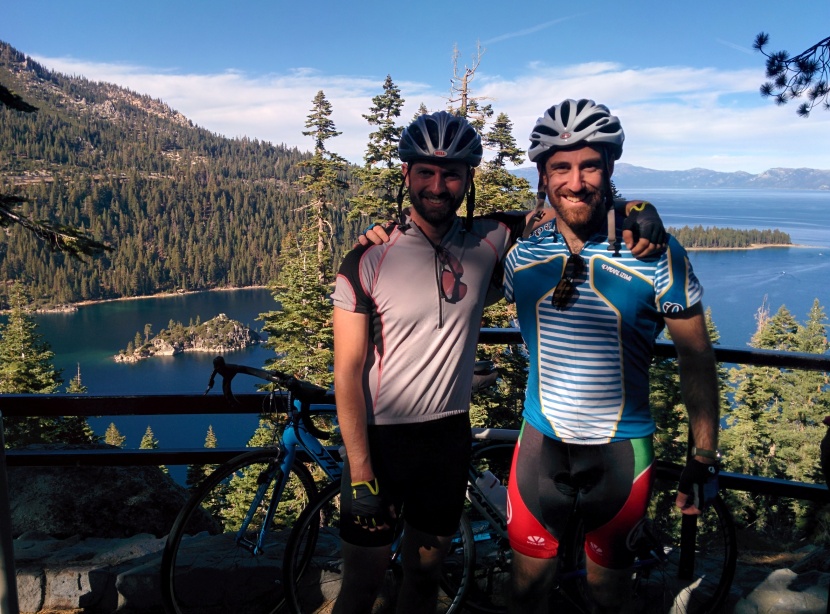