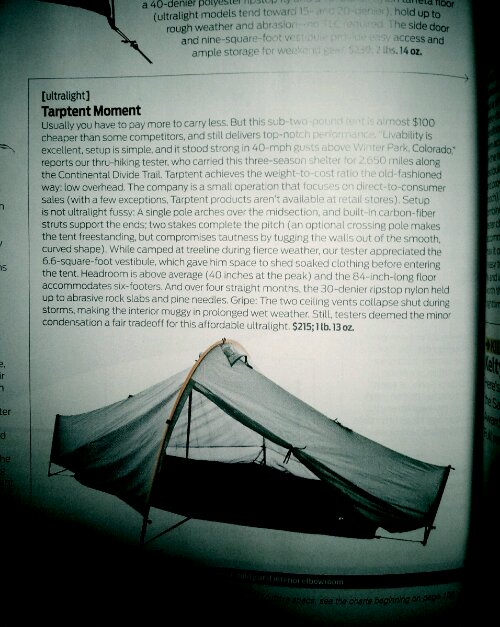 I was provided a Tarptent Moment to test on the CDT. It’s a hot little tent. It’s super simple to set up, is roomy, provides full coverage, both from rain and bugs, sets up tight and is relatively light. It’s so popular, that I thought I’d provide my notes on it here. The quotes below were condensed and will be published in the soon to be released Backpacker Gear Guide.

Henry Shires’ Moment set up to get away from mosquitoes just above Green River Lakes in the Wind River Range: 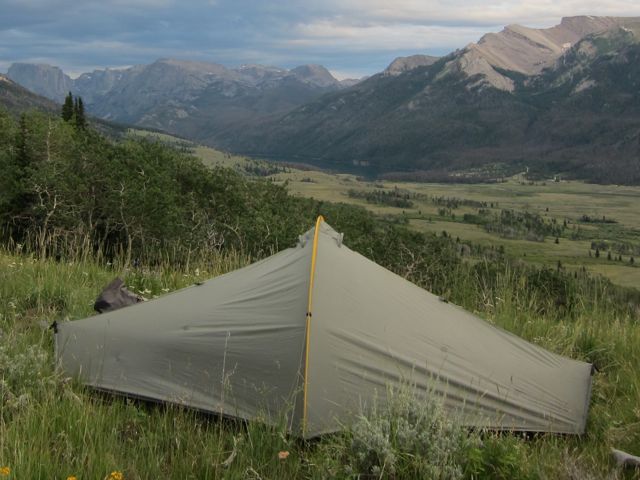 “The Tarptent is still in my pack, so that’s a good sign. All in
all, I like it. But with all gear there are some compromises.

Obviously, I’ve had some harsh conditions. Wind wise, 50+ mile an hour (note, the editors called me on this likely inflated wind speed) winds above Winter Park were some of the strongest. I was happy to
have the moment when compared to my partner’s ultralight shelter. With
the guylines deployed, it’s a pretty sturdy tent. I wasn’t worried
about it blowing down, and it didn’t flap all that horribly. A niggle
is that in strong winds, some of the webbing whips so fast that it
“buzzes”. In rain, it’s been waterproof. But when it’s raining and
there’s condensation on the inside of the tent, I get wet. That sucks.

I think that this tent has worse condensation issues than my other
silnylon tarptents. After the first month, I was almost ready to send
it home. For some reason, spring in Montana made this a condensation
nightmare. Even with all of the vents open, I’d end up in a tent with
drenched walls and such high humidity that my sleeping bag was damp.
This problem has gone away somewhat and I am content with the
ventilation for typical western summer mountain conditions. The top
vents barely stay open, really they don’t. Keeping the door open
helps. If there is a breeze, the ample mesh perimeter vents well. My
wettest night in the tent occured on Lewis and Clark Pass in Montana.
A rainy, lightning filled night, combined with condensation laden
walls and wind meant that a slight mist fell on my all night long.
That sucked.

Livability is excellent. Ample space to sleep with all of my stuff
inside and keep everything away from the walls. Easy of setup is
superb. One pole and two stakes. I’m set up way faster than my
partners every night. Durability is good for an ultralight shelter.
Henry Shire’s tarptents have a higher degree of craftsmenship than the
competition. I’ve ripped the bottom out of the stuffsack however. The
poles did that.

Other things… I’m not carrying the extra pole. I find that it
doesn’t allow for a taught pitch. The vestibule is great. Plenty big
and keeps rain away from  inside of the tent. All in all, I like the
tent because it feels a little more storm worthy than the competition.
It’s pretty strong in the wind. And the downsides are shared with most
other models on the market. Across the board, condensation is a
problem. But it might be worse with this tent. I wish the top vents
were designed better. And I prefer floorless tarptents.”

Caught in the moment of sneezing in the Moment:

“I’ve carried it for a little over 2000 miles at present. By then end
of the month that number should be 2,650 miles. So far, Montana,
Idaho, Wyoming, Colorado and northern New Mexico. My hiking partner
says “one million nights” but I think it’s closer to one hundred.

Last week I really loved the tent. I was up hiking the divide in the
San Juans when a tropical storm from the gulf sent moisture our way.
All day we had steady rain, snow and strong winds. By two in the
afternoon we were hypothermic and hastily bailed down to the nearest
trees. The ease of setup really made a big difference that day. Even
though my hands were barely functioning, I had my tent set up much
faster than my partners. The vestibule was big enough to cram myself
into and peel off my soaking clothing before I got into the tent. I
also “gasp!” cooked in the vestibule. A hot pot of soup was the only
way to rewarm myself. Took at good 45 minutes to stop shivering. Only
after six hours of rain, when it was really pounding down, did I start
to feel some misting. It wasn’t enough to wet my bag. I stayed dry
when it really mattered.”